Sir William Rowan Hamilton and Lady Helena Maria Hamilton Bayly around 1860.
Reproduced (and then slightly adapted by removing some blots) from a
tweet from TCD Research Collections, and from a photo of a photo in possession of
Trinity College Dublin Library. It is shown here courtesy of the Board of Trinity College Dublin. 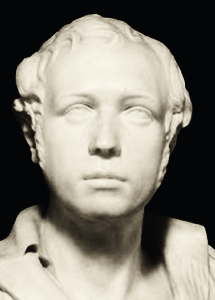 Hamilton as if in his fifties
2019 clay sculpture by
Max Power in recognition of
endeavours on behalf of WRH.
The bust does not exist any more.
Courtesy Max Power.
Hamilton in 1859
Reproduced from
Graves, R.P. (1889), Life of Sir
William Rowan Hamilton, Vol. II.
Dublin: Hodges, Figgis, & Co.
https://archive.org.
Hamilton ca 1861
Reproduced from
“What is Life?
Celebrating Erwin Schrödinger.”
Manuscripts at
Trinity College Dublin.

The first bust shown above was made in 1830 by Thomas Kirk. According to Graves, during a visit to the Dunravens, the parents of his pupil Lord Adare, “Lord Dunraven requested him to sit to Kirk, the Dublin sculptor, for a marble bust. The request was complied with before the end of 1830; and one of Hamilton’s letters intimates the fact that, as part of he preparation for its execution, he had to submit to a cast being taken from his head. The bust may therefore be supposed faithfully to represent his cranial development, and in this respect to possess a permanent value.” Graves then compares the 1830 bust with the 1833 one, “in its representation, however, of the features of the face, it seems to me to be inferior as a likeness to a miniature bust executed in 1833 by Mr. Terence Farrell [...]. I have therefore preferred to prefix as frontispiece to this [first] volume an autotype copy from a cast taken from the model of the latter.” [Graves 1882, 370]. According to a note made by Clement Ingleby, given in his 1867 book ‘Memorabilia and memorials of Sir William Rowan Hamilton : collected in his honour by Clement Mansfield Ingleby’, the first bust was (at that time?) in the possession of Lord Dunraven, the second one in that of Lord Talbot de Malahide.

In his book Ingleby also gave a comment from William Edwin Hamilton, that the portrait of Hamilton and one of his sons, made around 1846, is a part of a daguerreotype of Sir William, Lady Helen and their family, made by the artist Glukman. “From this portrait Messrs Nelson and Mayhall took the glass negative, of which it is a print.” The portrait as shown above is a part of the picture of Hamilton and his son, which itself thus is a part of the family photo. In my AVM  I had placed the part showing the son, surmising it was William Edwin, in the third row of the overview of the Hamilton family. The fact that William Edwin does not comment on who the boy in the photo is, underpins the suggestion that it is he, and not Archibald.

The 1855 photo comes from a family album of the O’Regan family, together with the photo of Lady Hamilton. It was given in the book about Dunsink by Patrick Wayman. He also showed the 1864 portrait, with the caption, “The last known photograph of Sir William, taken in 1864 or thereabouts. This photograph, from the records of the O’Regan family, is referred to in an extant letter from Helen Eliza Hamilton, before her marriage, to Ann O’Regan, sister of her future husband, the Venerable John O’Regan, dated 8 March, 1866 (J. O’R.).” I took the liberty of flipping the photo, because of similarities with the one from 1861. Of that photo I do not know anything except that it was used in the online celebration of Schrodinger, but I did take out some of the blots on his face. For what I did see the comparison.

Graves regarded the 1859 photograph and the photograph made from the 1867 bust, showing Hamilton seemingly in his fifties, as the best images of Hamilton. “I take the opportunity of expressing my opinion that this representation of his features [the 1859 photograph, given as a frontispiece to the second volume] stands out from all other photographs of him which I have seen (and I believe I have seen almost all that were taken), as alone doing something like justice to the combined intellectual and moral character of the subject. It exhibits, I think, both in conformation and expression, the profound thinker, the reverent benevolent sage. The marble bust in the Library of Trinity College is from the hand of Foley, and a photograph from it supplies the frontispiece to the present [3rd] volume. Our eminent sculptor never had the advantage of seeing Sir W.R. Hamilton, and had to work from small photographs and a cast of the anterior half of the head. The aspect which the photograph presents will, however, be acknowledged by all who knew the living man to be both fine and like.” [Graves 1889, 120]. Power, who made the newest addition, used the 1859 photo and the Foley bust, and it is so much like the image of Hamilton I have in my mind that seeing it for the first time it seemed to me as if the Foley bust had turned around to look at something else. But with an even better likeness to the 1859 photo, which is the reason I placed it between those two images.

Every now and then I look at the painting by Sarah Purser, and ask myself why I do not like it at all. Even though I like other paintings by Purser very much, to me this painting has nothing to do with the photos, and with what Graves specifically mentioned as representing Hamilton in the best way. The problem is that even though it may have had likeness, in the painting Hamilton’s facial expression is very different from the photos. Painted in 1894, and therefore perhaps influenced by the then already starting gossip, it shows a dissatisfied and judging man. And it does not show what the photos show, the “reverent benevolent sage” as Graves called it. I have often wondered whether I would have believed him enough to write my essay had I only known Purser's painting. It can be seen on the website of the Royal Irish Academy.